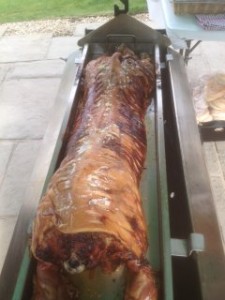 Tatworth, a beautiful little village with a lot of history dating back many years. Hog roast Tatworth were over the moon when we found out that we would be catering for such a big event here. The mayor managed to put together an event at The Poppe Inn, a quiet little pub near the entrance to Tatworth; all went well despite Tatworth being quite hard to find, we managed to arrive plenty of hours before our initial serve time ready to prepare our hog. Upon arrival we were greeted by the mayor who allocated us to the kitchen at the back of the pub where we would cook our pig in time for the event. We managed to get set up, place our pig in the machine and turn it on to slowly cook. The serve time came and we brought the pig out into the pub along with the salads and the quiche for the vegetarians; we placed the hog onto our carving tray which sent the aroma of the pork around the pub and within second’s the guests were looking around in amazement. The mayor was the first person to carve a piece out from the pig and we placed the bread rolls to the side along with the salads, everybody made a queue right round the pub to grab a piece! Best thing about being a caterer for hog roast Tatworth is watching people’s faces when they take their first bite into our hog roast. Hog roast Tatworth had a fantastic day and hope to visit the village again in the near future!